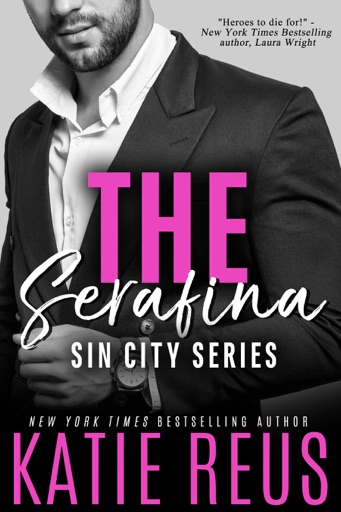 He’s dangerous, sexy, and everything she wants. And he’s about to make his claim…

Sierra hit it off with Hayden from the moment they met. The sexy, tattooed ex-SEAL is the main star in her wildest fantasies. She just wished he felt the same way. Hayden’s struggled to keep his attraction to the beautiful casino chef a secret. When an attacker targets her, he will do whatever it takes to protect her and convince her they’re meant to be together.

I’m ready to move on. Please don’t search for me. Please just let me go.
~Ellie

The note on the kitchen table shatters Jay Wentworth’s world into bits. Ellie is his lover, his soulmate, his best friend…she’s the woman who stood by him through the aftermath of a horrible explosion, the woman he’s planning to propose to. He’d do anything for her…except let her go. With his fierce protectiveness kicked into overdrive, he teams up with Ellie’s Hotel Serafina boss, billionaire Wyatt Christiansen, to find her. Ellie is family at the casino and they take care of their own.

Ellie is devastated when her secret past finally catches up with her. Stupid to think she could bury the mistakes of her youth and find happiness with a good man. Leaving Jay rips her heart to shreds, but it’s the only way she can protect him from the dangerous people she once ran with. And deep down, she fears he’ll never be able to forgive her for hiding her past from him.

The closer Jay gets to the truth about Ellie, the deeper he plunges into danger. He’ll move heaven and earth to save her, but if she can’t trust in Jay’s love it might be too late for both of them.

A woman on the run…

Angel has been on her own for two years, moving from place to place to outrun her past. With no family and few friends to lean on, she’s managed to keep her secrets and stay safe. But when her past suddenly catches up to her, she has a choice to make. Run or stay and claim her life once more.

He’ll stop at nothing to protect her…

Vadim has never let anyone close to him—until Angel. From the first time he met her, everything changed. As a private consultant for Wyatt Christiansen, he’s good with computers and he’s got connections to unearth people’s deepest, darkest secrets. When Angel’s life is threatened Vadim steps in and uses all his resources to end the threat once and for all. As the danger closes in, he lies to her in an effort to protect her, not realizing that even once the threat is eliminated, he might lose her anyway.

Author Note: Each title can be purchased individually or as a box set.