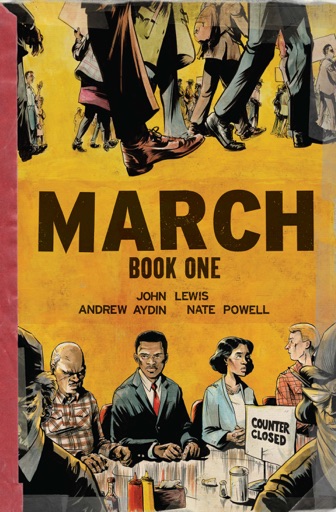 Top Shelf Productions is proud to present March, a trilogy of graphic novels co-authored by Congressman John Lewis (GA-5) and Andrew Aydin, with art by Nate Powell (Swallow Me Whole, Any Empire, The Silence of Our Friends, The Year of the Beasts).

March is a vivid first-hand account of John Lewis’ lifelong struggle for civil and human rights (including his key roles in the historic 1963 March on Washington and the 1965 Selma-Montgomery March), meditating in the modern age on the distance traveled since the days of Jim Crow and segregation. In March, a true American icon joins with one of America’s most acclaimed graphic novelists. Together, they bring to life one of our nation’s most historic moments, a period both shameful and inspiring, and a movement whose echoes will be heard for generations.