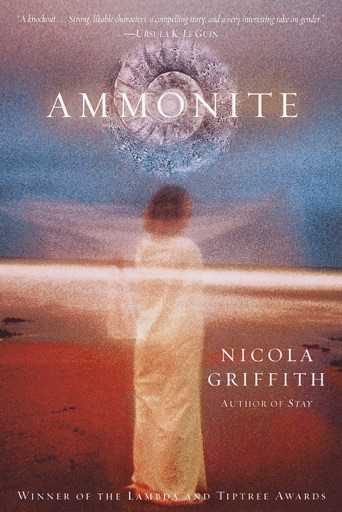 Winner of the Lambda and Tiptree Awards • “A knockout . . . Strong, likable characters, a compelling story, and a very interesting take on gender.”—Ursula K. Le Guin

Change or die. These are the only options available on planet Jeep. Centuries earlier, a deadly virus shattered the original colony, killing the men and forever altering the few surviving women. Now, generations after the colony lost touch with the rest of humanity, a company arrives to exploit Jeep—and its forces find themselves fighting for their lives. Terrified of spreading the virus, the company abandons its employees, leaving them afraid and isolated from the natives. In the face of this crisis, anthropologist Marghe Taishan arrives to test a new vaccine. As she risks death to uncover the women’s biological secret, she finds that she too is changing—and realizes that not only has she found a home on Jeep, but that she alone carries the seeds of its destruction. . . .

Ammonite is an unforgettable novel that questions the very meanings of gender and humanity. As readers share in Marghe’s journey through an alien world, they too embark on a parallel journey of fascinating self-exploration.

“A powerful story of connection, allegiance, and obligation. Read Nicola Griffith’s book—and keep an eye out for her name in the future.”—Vonda N. McIntyre