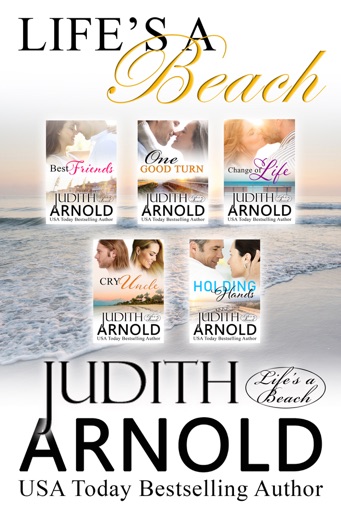 It’s always beach weather, especially when you’ve got five glorious Judith Arnold romances with beach settings! Enjoy all five of these romantic stories by a bestselling, award-winning author. Save money when you buy them all together in this delightful collection.

Lonny and Samantha became best friends in college. They’ve supported each other through broken hearts, family spats and career challenges. When Samantha’s longtime boyfriend dumps her, Lonny invites her to recuperate at his house in a seaside town—where he discovers, to his shock, that he wants a lot more than friendship from his buddy Sammy.

When Luke met Jenny, he was lost and struggling. Her optimism, trust and love gave him the courage to face his demons and slay them. Then she vanished from his life. Seven years later, she reappears—only she’s not the same cheerful idealist he’d fallen in love with. Can he rescue her the way she’d rescued him? Can he give her the strength to slay her own demons? Can a weekend at a friend’s beach house help them to rediscover the love they once shared?

Lila Chapin’s husband and sons take her for granted, and when they forget her fortieth birthday, she decides withdraw a chunk of money from the bank—her birthday present to herself—and spend a month in an inn by the beach, where she thinks no one can find her. Ken Chapin loves his wife—but he has been neglecting her as he claws his way up the corporate ladder. Finally arriving on the top rung, he realizes his success is meaningless without Lila by his side. He and his sons are going to have to find her and woo her back.

Pamela Hayes needs a place to hide. She flees to steamy, sandy Key West, where bartender Jonas Brenner offers her a new identity if she’ll pretend to be a prim, proper mother-figure for his wild-child niece. But the deal will work only if Pam and Joe can keep their emotions out of it—and that’s easier said than done.

Meredith Fischer’s widowed mother is starting a new romance. Her daughter is enjoying an exuberant social life. But Meredith’s marriage is comatose and barely breathing. She still loves her sexy husband, but he doesn’t see her, doesn’t hear her, and may be involved with one of the cute young students at the college where he teaches. Meredith can either pull the plug on her marriage or try to revive it with a romantic weekend at the beach. But how romantic can that getaway be when Mother Nature and a stray dog stand in her way?